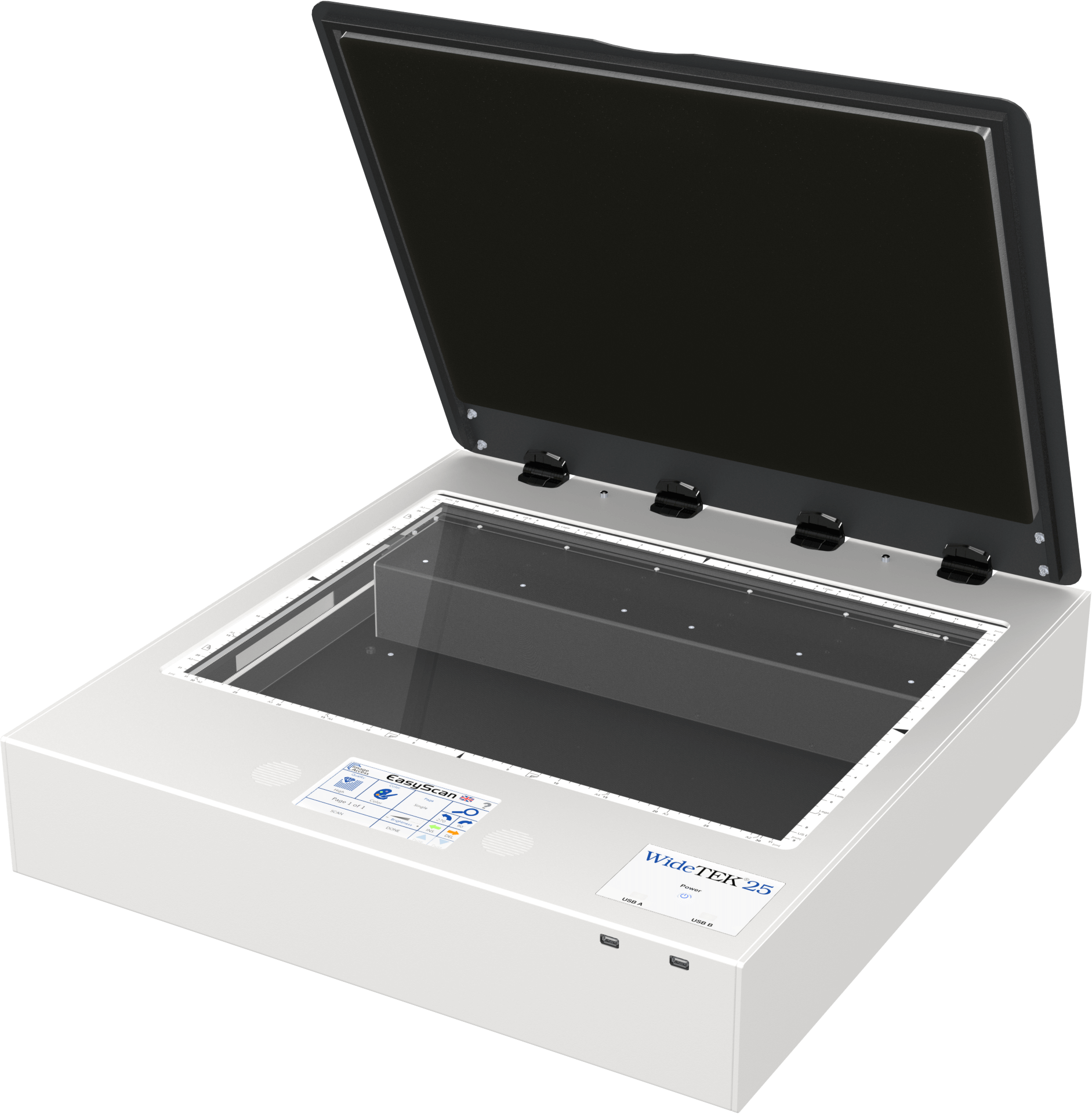 Large format color flatbed scanner for documents up to 18.5 x 25"

Enhanced with backlight for transparent source material, like X-rays

WideTEK 25-600, the world's fastest large format color flatbed, covers applications in every market, whether it is in the medical, government, industrial or graphics arts sector. It scans the full bed (DINA2+, 18.5x25".) at 300dpi color in less than three seconds, which is two times faster than the closest competition.

New! The WideTEK 25-600 brings you an even higher return on investment with the addition of the new WT25-BACKLIGHT option for scanning transparent material of all kinds, like X-rays, glass negatives, 35mm microfilm aperture cards, cutout stencils, sepias and film.

Above is an example of the various media scanned with the backlight unit. The scans are at the top and the source material below.

The optional backlight unit replaces the standard scanner lid. It is easily assembled and users can scan with or without the backlight, depending on the source material requirements, by simply switching the light on or off. The unit can be purchased separately for customers who already own a WideTEK 25-600. If you are a service provider, this gives you even more ways to generate revenues with your WideTEK 25.

In the medical sector, operators can scan negatives, radiography, cardio plaques and larger paper documents in black and white, color or grayscale as required. The WideTEK 25 is compact, only (76cm, 30") wide, so it will fit in any doctor's office or hospital floor.

There are many film scanners available on the market for small image formats and even medium sized images, but in the large format range, film scanners are very rare and/or prohibitively expensive. WideTEK 25-600 goes far beyond just film scanning and does it an a surprisingly affordable price.

Municipalities, cadastral offices, oil companies, GIS services and other government agencies use the WideTEK 25-600 to digitize and archive a number of different types of documents. But the WideTEK 25 is also ideal for photographers, galleries, advertising agencies and graphic artists to present and preserve their work in a digital format. 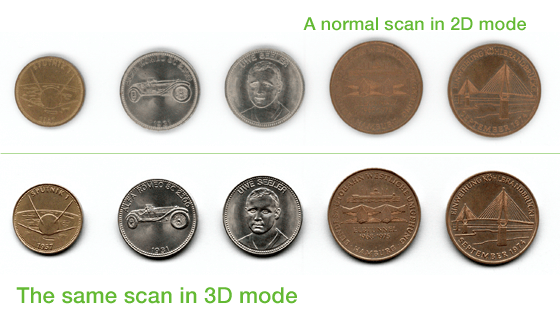 The revolutionary 3D scanning mode opens many new opportunities in the printing and industrial inspection markets. The 3D scanning mode captures the texture of surfaces so perfectly that the scan on a screen looks like the real thing.

The WideTEK 25-600 has two LED lamps, twice as many as the competition. With their new diffusors, these lamps produce an extremely homogeneous illumination which eliminates all unwanted shadows caused by folds, wrinkles and other distortions of the scanned object. It also comes with a built-in 64bit Linux PC running on an Intel i3 quad core processor and 8GB of memory.

Simply put, there is no better large format flatbed scanner on the market than the WideTEK 25-600, with or without the optional backlight unit.

The WideTEK 25 wide format flatbed scanner is a valuable production device for the following markets and applications. This list is neither complete nor exclusive, there are more markets and applications than listed and it should be taken only as a general guideline. If you have a specific application that is not listed here, please check with your sales representative.

Image Access holds the copyright on all images shown below.

To get the best possible results with your scanner and to fully understand how to operate it, you should always have the most up to date version of the manuals, instructions and other product documentation. The printed version might be outdated already and you can check here to see that your product documentation is complete and up to date.

Image Access scanners are environmentally friendly, comply to the highest security standards and do not interfere with other devices. We have also made sure that no harmful radiation in the form of electromagnetic emission and UV or infrared light exists. Because these kinds of scanners are heavy production machines with inherent risks to the operator, no one should operate a scanner from a vendor who cannot provide at least an IEC/UL 60950 safety report.

Image Access scanners conform to the many national and international standards which are listed below. Our scanners have been tested and certified by independent laboratories and we can also provide test reports of each standard on paper upon request.

The WideTEK 25 conforms to the following standards:

The cETLus Listing Mark is used for products going into the Canadian (shown by the "c" in the mark) and US market (shown by the "us" in the mark). Products with the cETLus mark have been examinated and successfully passed tests according the requirements for device safety. The standards for IT-equipment are UL 60950-1 for the US market and CAN/CSA C22.2 No. 60950-1 for the Canadian market.

The ETL-EU Listing Mark is used for products going into the European market (shown by the "EU" in the mark).Products with the ETL-EU mark have been examined and successfully passed tests according the requirements for device safety. The standards for IT equipment are IEC 60950-1 and EN 60950-1, or the new standards (from 2014) IEC 62368-1 and EN 62368.

The China Compulsory Certificate (CCC mark) is a compulsory safety mark for a wide range of products imported and sold in the Chinese market. It became effective on August 1, 2003, when China became a member of the WTO (World Trade Organisation). The CCC mark is required for both Chinese manufactured and foreign imported merchandise. The CCC certificate must be renewed annually as part of a follow-up certification which includes a factory audit.

BIS is the acronym for Bureau of Indian Standards.

Relevant safety standards for India are:

The BIS mark is a requirement for manufacturer who intend to export their products to the Indian market. Tests executed by accredited laboratories ensure that the tested device fulfil all safety relevant requirements of the above named standards.

This device complies with Part 15, Class A of the FCC47 Rules.

Operation of this product is subject to the following two conditions:

The devices correspond to the requirements of the RoHS-guidelines (Restriction of the use of certain Hazardous Substances in Electrical and Electronic Equipment).

One of the distinguishing features of our scanners is the unique Scan2Net technology. A part of Scan2Net is the ability to update the scanners firmware in a few seconds via the network interface. The newest firmware can be obtained through our customer service portal at any time and the portal will also always check, which firmware is suitable for your specific scanner.

In addition to service and support options available 24/7, software and firmware updates can be found and downloaded from our Customer Service Portal. In order to get the maximum benefit from the features and options of the Customer Service Portal, please log in with your personal account data. If you do not already have a personal account, you can request one here. Your account data and user login will be sent to your email account immediately. In the meantime, you can log in as a guest (Login: Guest, Password: Guest) to get a first impression. Please keep in mind that the guest account only gives you limited access to the features of the Customer Service Portal.